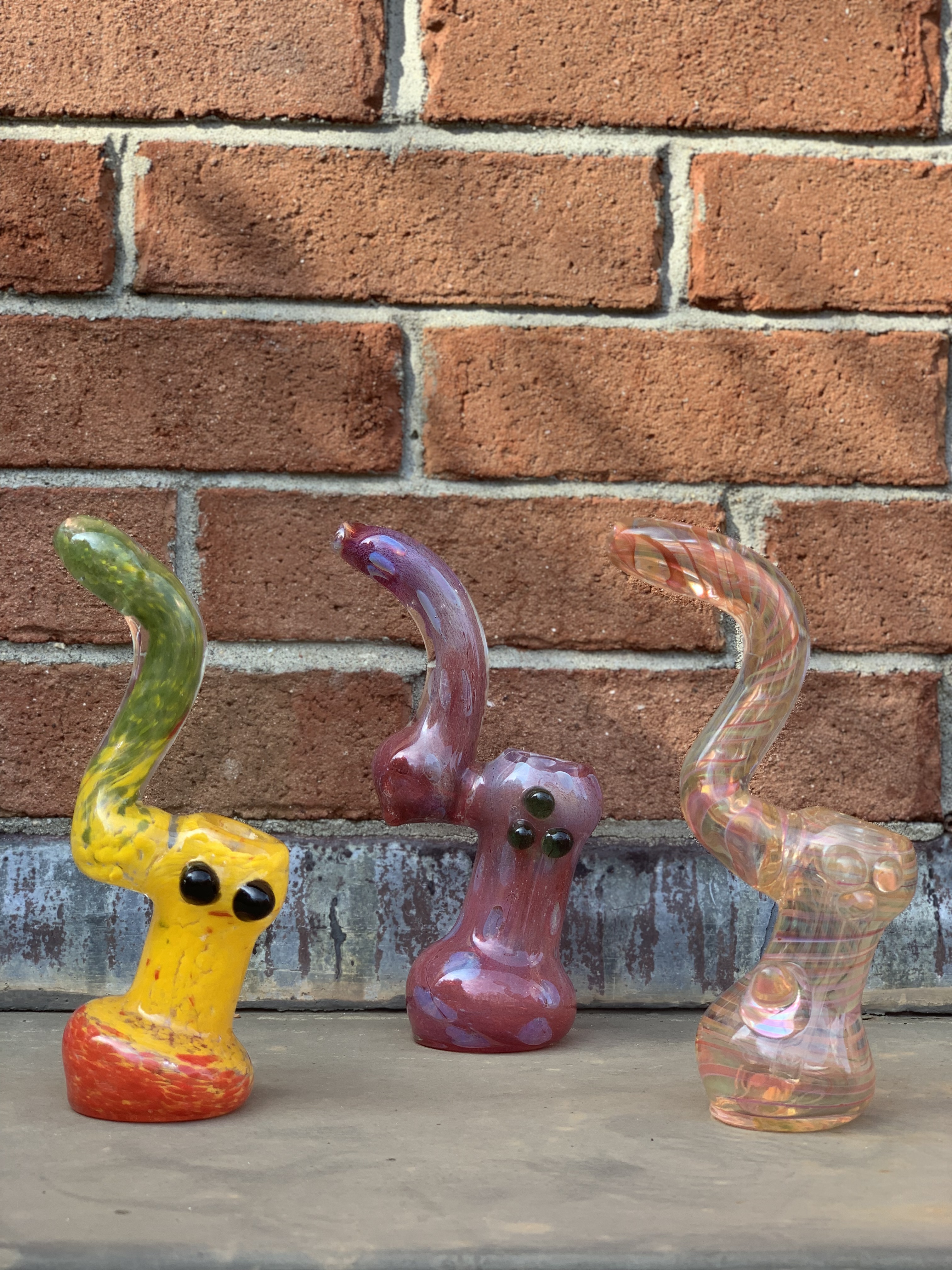 The speculation is that bubblers are the peanut butter cup of the smoking world- two great tastes that taste great together. Surely it was a conversation about which was better, the handy hand pipe or the super cool bong, that inspired someone to create a combo.

Bubblers are essentially water pipes, and so match many of the design elements as its big brother, the bong. Both bongs and bubblers have bowls, downstems, water chambers, and mouthpieces. However, a bubbler, by design, is usually much smaller than a bong and has much less water.

So why would one choose a bubbler over a bong? Well, size is probably the main reason. Most bongs are well over 8 inches tall, and most bubblers are well under that. That means a bubbler offers a greater amount of portability over the traditional bong. Bongs are generally best on the table top whereas a bubbler is always meant to be in hand.

NOTE: Bubblers made of glass, though, are more susceptible to damage than most bongs, so care is still required when transporting. But a bubbler usually takes up much less room and can be more discreet than your typical bong.

And, in related news, bubblers are also being used for blunts and cones now too. Micro versions called Blunt Bubblers / Cone Bubblers / Spliff Bubblers are palm sized and have an inlet to hold twisted goodness.

What is a bubbler made of?

Bubblers do come in all shapes, materials, colors and sizes, although most are small enough to resemble a big hand pipe. There are multi chambered bubblers, bubblers with percs, fold up bubblers and more.

Bubblers are made of glass, quartz, plastic, silicone, wood and even metal. Most bubblers are glass and can be clear, worked, dichroic, fritted or opaque. And hand-blown glass has the same effect in a bubbler that it does in a hand pipe; anything from a crisp, scientific look to heady, one-of-a-kind design glass with that custom look and feel.

As visuals are one of the main reasons bongs are fun to look at and use, bubblers can also have the same striking effect on the eyes on a more intimate scale.

How is a bubbler made?

The biggest thing to understand about a bubbler is it’s usually all one piece. Even the downstem is permanent, connected to the bowl.

And the bowl of a bubbler is the final difference between most bubblers and most bongs too. On most bongs, an herb slide pulls out easily from a downstem to clear the chamber. Your bong can have big bowls or little bowls, bowls with handles or with studded bead grips, even glass bowls, wood bowls or durable metal bowls. On a bubbler, though, there is no removable bowl. The bowl is usually a recessed indention on the top of the pipe.

NOTE: Blunt Bubblers / Cone Bubblers / Spliff Bubblers have an inlet to hold cones, spliffs, fatty joints or blunts. They do not have a bowl.

A recessed bowl is similar to its other brother from a hippie mother, the hand pipe. If you can picture the simple spoon pipe’s design, the bowl is always there, ready to load. On a bubbler, that concave bowl has a downstem running out the base and into the water chamber, where smoke will be pulled through.

With a recessed bowl on a bubbler, just drop in a glass screen (or find the perfect size pebble to be truly old school), and you have a totally portable water pipe with no parts. By the way, some bubblers have built in screens.

One final design note, sometimes there’s an airflow carb beside the concave bowl of a spoon pipe to help with clearing the chamber. Many bubblers have the same setup for the same reason.

Why use a bubbler?

Most serious smokers will have a pipe too… and a bong (in addition to the bubbler). Whatever makes the momentum the sweetest.

Of course, there’s more ways to go than bubblers, bongs and hand pipes (oh my!). And don’t forget tools like pokers and lighters and so on. Those work just as well with a bubbler as they do with a hand pipe or a bong.

Of course, there are downsides to the bubbler too, like cleaning.

How to clean a bubbler

Because a bubbler is usually a one solid-piece pipe, that means it can be harder to get in there and clean. But with modern cleaners, a little patience and the right approach, keeping a clean bubbler should be no problem.

You want to know the easiest way to keep a clean water pipe? It’s simple; empty it after every use. Boom. It works for large water pipes and bubblers alike. Do this, and your water pipe will stay clean indefinitely.

Water pipes that let dirty water sit are prone to grow mold. This changes the flavor of herb and makes the pipe harder to clean. If you do have a stanky bubbler, though, it’s not the end of the world.

The best method to use is the soak. You can work with any number of organic cleaning solutions on the market like Formula 420 or Orange Chronic. You can also use a 70/30 solution of isopropyl and water or rock salt and citrus juice or even vinegar and baking soda. The key is, having a solvent to break down oils and an abrasive to scrape away residue.

Fill your bubbler or, better yet, submerge it completely for a good soak. Follow instructions about timing and agitation if using a commercial product. If using a homemade concoction, experiment with the timing, but five minutes is usually a good jumping off point.

\At the proper time, see if built-up material can be gently shaken away. If not, allow the soak to continue until it does.

After your bubbler has had the cleaning solution soak for the required amount of time and it is clean and clear, washing out and rinsing your bubbler several times should return it to its pristine glory. Using distilled water for future smoke seshes will also make it harder for dirt to hang around.

For the money, bubblers are a great option, usually costing far less than a bong and delivering better smoke than a pipe. They deliver the portability and discretion of most hand pipes and the cooling power of water, being the best of both worlds. Bubblers are a great addition to any herb smoker’s tools.

Bubblers can also be made of a variety of materials like glass, ceramic and silicone so personal choice is up to you. Most bubblers are one-piece designs, meaning there is no bowl or down stem to worry about or lose. Their designs often prove to be spill resistant too.

In short, bubblers are a great go-between in the world of bongs and hand pipes. A bubbler capitalizes on the best of both worlds, being portable, but delivering power hits with its own cool flair.

Bubblers can now even be used with RYO fatties, delivering smoother smoke in the palm of your hand, making any smoke circle that much cooler.

The History of The Water Bong

The Discovery of the Water Bong. When was the first Water Pipe discovered? Click Here to Watch Video   https://www.youtube.com/watch?v=FupQ0UjxGH8 read more 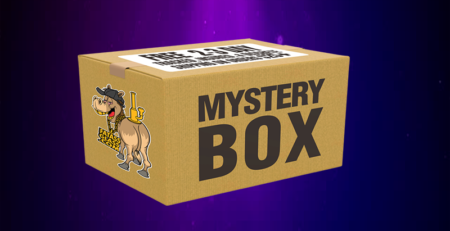 The Fat Ass Glass “Mystery Box” is our way of giving back to our customers and thanking you all... read more 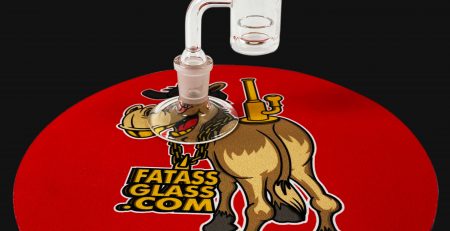 Check out this awesome video showing the quality of our Custom Quartz Bangers! Available in 14mm & 18mm male... read more 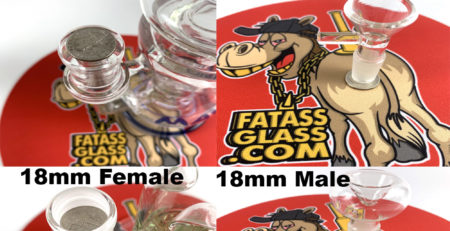 How To Determinine Joint Gender and Size While all of Fat Ass Glass Bongs comes with it’s own bowl piece... read more

1.) 100% Hand Selected Products for Smokers by Smokers! All our products at Fat Ass Glass Company are hand selected... read more 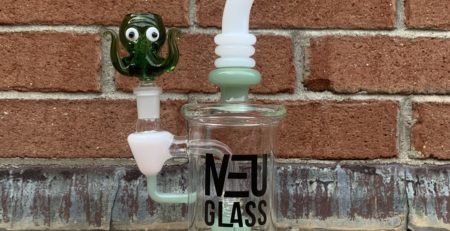 Adding Attachments to Your Bong

Love your bong but looking to love it even more? Check out our large collection of attachments. Enhance your... read more